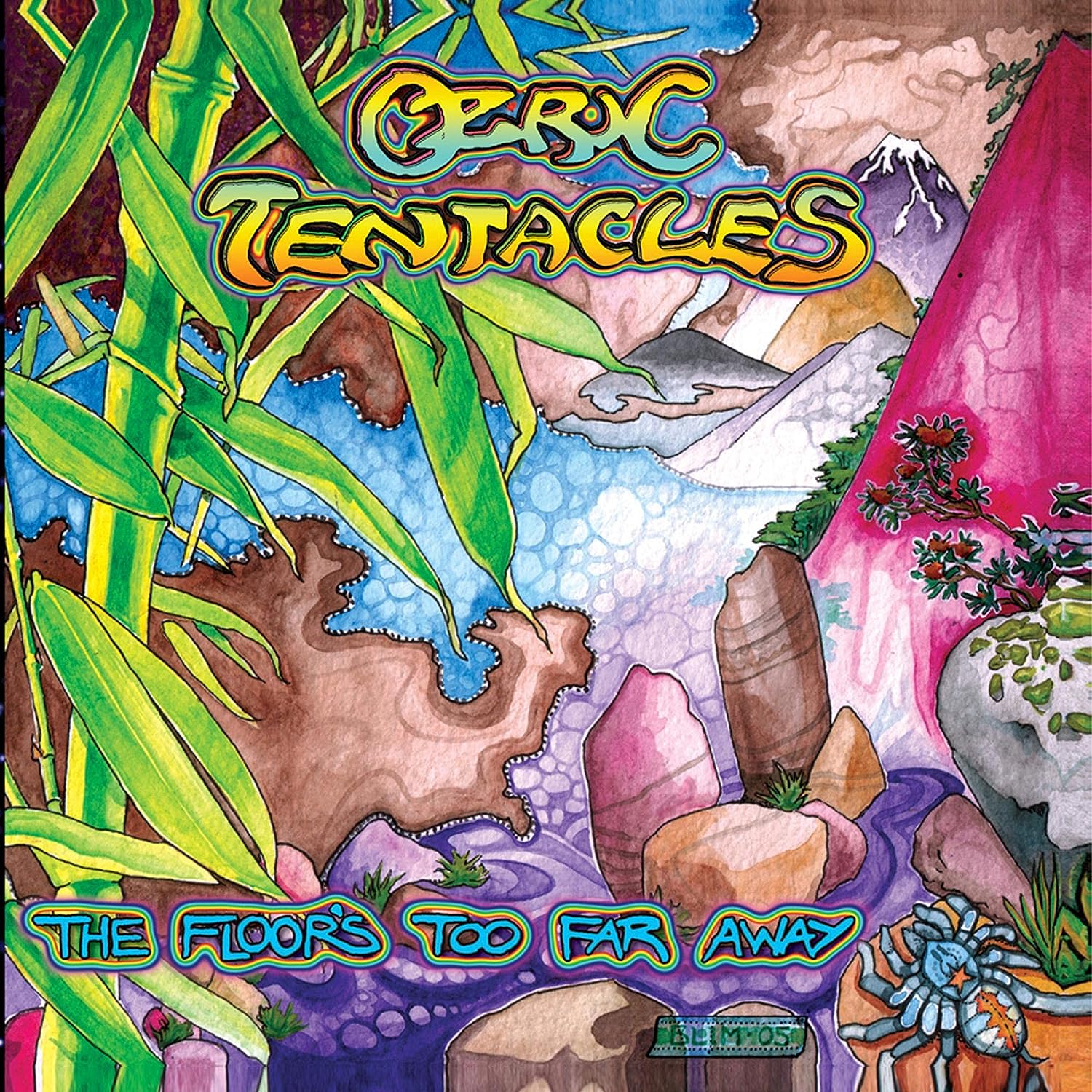 Ed Wynne has solved the mystery of time travel. As the keyboardist/guitarist/chief programmer/creative mastermind of the band Ozric Tentacles, Wynne traverses the ages through his primordial yet distinctly modern, mind-bending music. The Somerset, England, resident is a citizen of the world: his art knows no boundaries in time or space.

"Recently we have been playing the four corners of the world and it seems the audiences like the combination of techno rock, strange rhythmic grooves, stomping bass line, and the quasi ancient and ethnic music," Wynne says.

Wynne jokingly refers to OTs music as "ethnological forgery", but Ozrics new Magna Carta release, "The Floors Too Far Away", is far from bogus. Recorded in Wynnes home studio in Somerset, England, the nine-track, all-instrumental CD is a musical reflection of Wynnes centrifugal creative vision  a vision synthesized into a spiraled, multifaceted tapestry of butt-moving, trance-inducing ethno-techno space rock. "Ive always been interested in Eastern music." Wynne says. "But none of the scales I use are official, traditional Eastern scales. They are just snippets of what I have picked up over the years from traveling to different places and keeping my ears open."

In many ways "The Floors Too Far Away" is a signature Ozrics record. Rife with incessant intergalactic grooves, the new record offers a satisfying, near state-altering listening experience. "We took a bit more time in coming up with the proper track listing for this," admits Wynne.

Although Ozric Tentacles is the bridge between 1970s space rock and 1990s techno, they've never quite crossed that bridge themselves. They remain suspended in an approach that sounds like it could've come straight out of the recording sessions for Gong's You and Steve Hillage's Fish Rising"span" albums from the mid 1970s, a decade before they were formed. With Ozric, you strap yourself in and hold tight as the band careens through sequencer patterns spinning like rotor blades, slicing up the real fusion drum grooves that remain the engine of their sound. As kinetic as techno, but full of syncopated rhythms that shift through complicated time signatures, Ozric layer synthesizer swirls, deep-throb bass lines, and serrated guitar forays from founding and only original member Ed Wynne. In fact, Wynne plays a lot of the instruments and programs the entire album. With the departure of flutist Champignon, part of the sonic palette is missing, but Wynne and his wife, keyboardist Brandi, make up for it in electronic colors. Much of Ozric's music is about morphing forms, as stuttering voices evolve into a gurgling lead synth line that's chased by a guitar that morphs into an explosion. The Floor's Too Far Away breaks no new ground for the psychedelic travelers, but it is more tightly arranged and a cogent distillation of a sound that's been fermenting for 23 years. The tea is definitively steeped. Have a cuppa. --John Diliberto

"span"Stamping their own identities on Wynnes initial creations are Brandi Wynne (bass, keyboards, sampling) and keyboardist Tom Brooks. "I never have a complete concept of what the finished product is going to be," Wynne admits. "It is like weaving a tapestry and then filling in the colors and little holes and polishing this and that." Ozrics get a triple dosage of rhythmic intensity from the explosive chops of the Terry Bozzio-inspired drummer Metro, old friend and former Ozrics member percussionist Merv Pepler, and Eds very own programming genius. "There are some moments when you cant quite tell if the drums are real or programmed," Ed says with the hint of a laugh. "Ill sometimes add strange little rhythmic twists to the real drum tracks. Ill take a timbale sound and a click and it will repeat within a four-beat pattern as the drums are going along."

"span"Wynne started from humble beginnings in the mid 1980s. Having left school when he was just 16 years old, and having learned a thing or two about composition and musical identity from listening to Frank Zappa, Hawkwind, Jimi Hendrix, Germanys Kraan, and French art-rockers Gong, Wynne dreamed of one day making his own bold and idiosyncratic artistic statement. "I started recording on my four-track reel-to-reel with all my channels connected to a Marshall guitar amp and that was my studio at the time," Wynne says. "But it worked."

"span"From his home studio, Wynne embarked on a prolific recording career as the mastermind of Ozric Tentacles, which has seen over twenty records marketed in over twenty years. The band broke barriers with their first record, "Pungent Effulgent", and increasingly won fan support through such favorites as "Erpland" (based on the fictional character "Erp", hatched from Wynnes imagination), "Afterwish" and "Strangeitude." In 1993, the Ozrics spawned the cosmic/old-world-meets-new "Jurassic Shift", which soared to within the British top 10 pop albums chart. With one fell swoop the Ozrics were instantly identified, perhaps erroneously, with the "Crusty" movement  Englands youth culture movement that mirrored the U.S.s 50s beatnik generation and 60s hippie revolution. "When we recorded Jurassic Shift, there were a couple of coincidental trends going on at the time which meant we were kind of cool, even though we were exactly as we were and would be," Wynne says.

"span"Subsequently, one of the Eds tunes, "Sploosh!" would be used in a BMW automobile commercial. It was a defining moment for the band: Ozrics were capable of putting butts in seats, claiming mainstream appeal, and never losing sight of its original creative intentions. Wynne continues to explore and his musical expedition unfolds into the 21st Century. All the time Wynne fine-tunes his writing, commenting on life as it was, is, and will be. "Eddie works all day," explains wife, bandmate, and Ozrics manager Brandi Wynne. "He wakes up, has a cup of tea, then goes into the studio and stays there all day." "Writing is pretty much what I do day to day," Ed says, "and I am fortunate to be able to explore any number of different musical directions."

See all of this year's holiday products rated from best of worst! Plus, our gift guides! Read now.

We want your recommendations for Best Eyeshadow Palette (2021) (specific shades, please!) — and if you've previously shared your favorites, don't forget that you can always make more recommendations as new products release or you've discovered a new favorite.

Danessa Myricks Medallion Colorfix Metallic ($18.00 for 0.34 oz.) is a deeper, orange-red with moderate, warm undertones and a pearly sheen. The shimmer was more noticeable when applied as a lip product as it looked more glowing as an eyeshadow and blush. It also looked...

Danessa Myricks Medallion Colorfix Metallic ($18.00 for 0.34 oz.) is a deeper, orange-red with moderate, warm undertones and a pearly sheen. The...

A-
Permanent
Read Review
We hope you'll consider supporting Temptalia by shopping through our links below. Thanks!
SephoraBeautylishUltaNordstrom SAYOK Car Coasters for Cup Holders, 2.56 in Fingertip Grip Desig

Sephora Black Friday deals for the 2021 year have been sneak peeked by the brand on their app, but you'll find the previews here, too! These deals go live November 26th, beginning midnight PT.

All of the active deals and sales in beauty in one place. Updated with new deals as they go live!

Chanel Or Baume Essentiel ($45.00 for 0.28 oz.) has a transparent, balmy base with barely-there, warm gold pearl and a dewy sheen. The texture was lightweight, emollient, and very balm-like--high slip but thin, spreadable, and glossy in its finish. It had very sheer...

Chanel Or Baume Essentiel ($45.00 for 0.28 oz.) has a transparent, balmy base with barely-there, warm gold pearl and a dewy sheen. The texture was...

I am an eyeshadow maximalist, so I tend to use a lot of shades per look. When I pull out a quad, it’s usually as a companion to a larger palette.

ColourPop Roaring Hearts 10-Pan Pressed Powder Palette ($16.00 for 0.35 oz.) is a new warm-toned neutral palette for the holiday season. It included six matte eyeshadows and four shimmer eyeshadows. The matte eyeshadows performed better compared to the shimmers, as two of...

Happy Wednesday! Here's this week's survey, which you can copy and paste and share as a comment.

Support Temptalia by shopping the retailers below! We earn commission on sales tracked from our links. Thank you!

B-
We hope you'll consider supporting Temptalia by shopping through our links below. Thanks!
SephoraBeautylishUltaNordstrom Ignition Starter Pushbutton Switch For Honda HR-V 1.8L 2016-2018